With all the talk about food on social media, its a wonder some of us get away from our devices to eat. Others? Not so much.

One Facebook advertiser, frustrated by the changing algorithms, has pulled the cord on their Facebook page  yesterday at 11:59pm (I think this  was West Coast time since the company is based there.)

They written a blog post explaining why they feel that it’s time to move on. They felt that with all the changes Facebook has been making, that they are not being seen, despite that they have been advertising on Facebook for some time.

By reading the post, this was something that has been on their mind for a while. They asked their Facebook likes the question in January if they should leave Facebook. This decision was not made lightly. 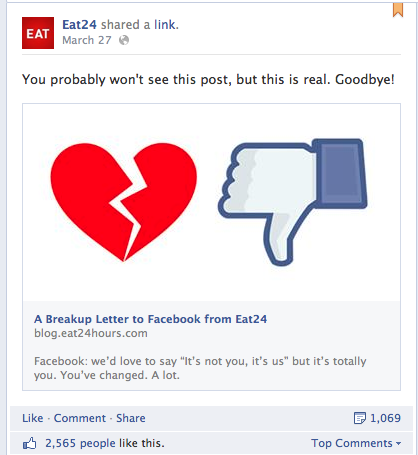 It just looks like we want different things @facebook. We want the people to have code ‘adiosfb’. You don’t even want to let them see it.

Yes, we know what day it is tomorrow. We will see if said company is doing this as an April Fool’s or not. Only time will tell.

I took a screenshot of the Facebook page just in case.